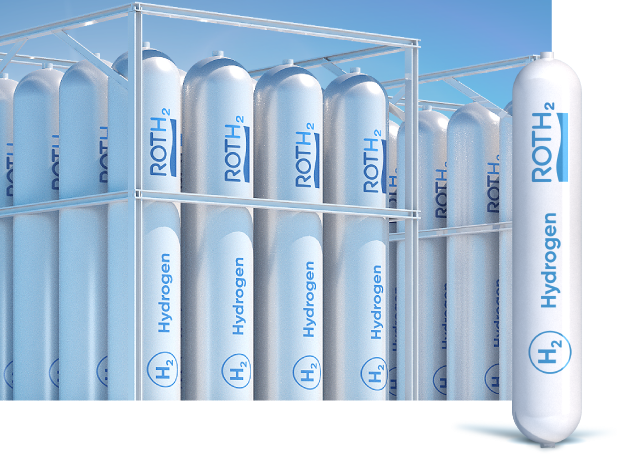 The thinness of the hydrogen atom allows it to pass through all packaging materials intended for conventional gases such as propane, oxygen, nitrogen, etc. ROTH2 offers a range of specific tanks up to 1000 bars.

• its combustion generates a large amount of energy (about 3 times more than petrol at constant weight)
• It is very abundant on Earth in molecular form (water, hydrocarbons, etc.). Hydrogen also exists in its natural state (the first natural sources of hydrogen were discovered at the bottom of the sea in the 1970s and more recently on land, according to IFP Énergies nouvelles;
• its combustion is non-carbon based, with no CO2 emissions… 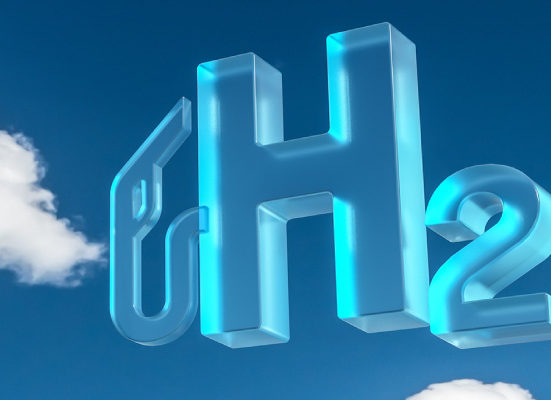 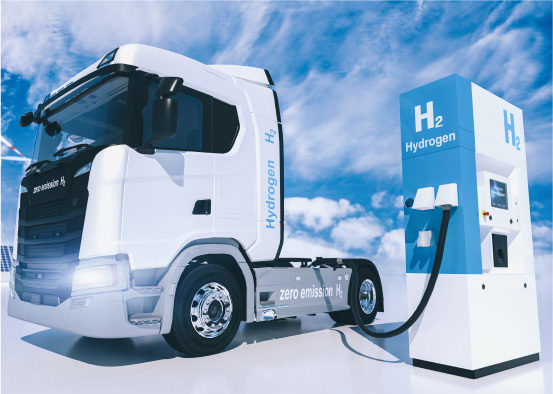 Hydrogen can be converted into electricity, heat or motive power depending on the end use. It has the advantage of being storable (problematic with electricity) and of being produced without CO2 emissions. Energy storage in buildings by providing electricity and heat through cogeneration, which would enable the development of positive energy buildings. As an energy carrier, it has several applications.

STATIONARY APPLICATIONS FOR MOBILE MACHINERY
Hydrogen can be used to power vehicles equipped with gas-powered combustion engines. In addition, a hydrogen tank can be combined with a fuel cell to improve the range of electric vehicles (2nd generation electro-mobility, known as 2G, the first corresponding to electric vehicles.

The storage of hydrogen

The cost of hydrogen production process

The cost of the most promising hydrogen production process, water electrolysis, remains high;
its use by the general public in transport requires the setting up of a network of hydrogen stations (service stations) which calls for considerable investment.

Hydrogen energy is promising in many ways. Nevertheless, its exploitation on an industrial scale is still in the early stages.

The energy challenges of hydrogen

Read more
The advantage of hydrogen in the fight against greenhouse gas emissions obviously depends on the way it is produced. A non-carbon based production chain in possible (electrolysis or CO2 sequestration, if it is derived from fossil fuels).
The development of a hydrogen energy chain depends on the combination of three factors: competitiveness in terms of price, energy efficiency and absence of CO2 emissions.

Read more
With fuel cells, hydrogen energy makes it possible to store and produce electricity on demand, thus making the most of intermittent renewable energies.

Managing the intermittency
of renewable energies

Read more
Hydrogen is difficult to store and transport because of its low energy density per unit volume. It is usually transported in cylinders or pipelines in compressed form: the gas can be compressed from a few tens of bars to 350 or 700 bars to be transported. On the other hand, it is possible to liquefy hydrogen at -253°C but this transformation is very energy intensive. It is also possible to transport hydrogen in the form of a metal hydride (the hydriding reaction is in fact reversible).
The natural gas network can also contain hydrogen up to 20% by volume, but this requires purification downstream of the network. It should be noted that it takes ten times more space to store gaseous hydrogen than petrol.

Read more
The transport sector offers major potential for the development of the hydrogen vector: it can be used directly in internal combustion engines or in fuel cells. Combustion engines using hydrogen already equip buses and refuse collection vehicles in the form of hythane (a mixture of 20% hydrogen and 80% natural gas).

Read more
Hydrogen’s reputation has been damaged by a few historical accidents such as the fire in the Hindenburg airship in 1937 and the explosion of the Challenger spacecraft on 28 January 1986. Nevertheless, hydrogen is less dangerous than natural gas. In hydrogen-powered cars, a dye is added to the gas. In case of a leak, the hydrogen is invisible, odourless and only hot above the source. Being very light, the gas is released vertically, which is a safety advantage.